The DeSoto Parks and Recreation Department would like to cordially invite you to experience a Virtual Juneteenth Celebration on Monday, June 15th – Friday, 19th. This event is a 5-part web series that captures cultural art, history, education, and fashion through a virtual lens. This program features an array of local and world-renowned talent. You will witness rich cultural performances, authentic storytelling, and a phenomenal musical finale by the legendary Inspiration Band.

Tune is each night on our YouTube page. We hope you will enjoy. 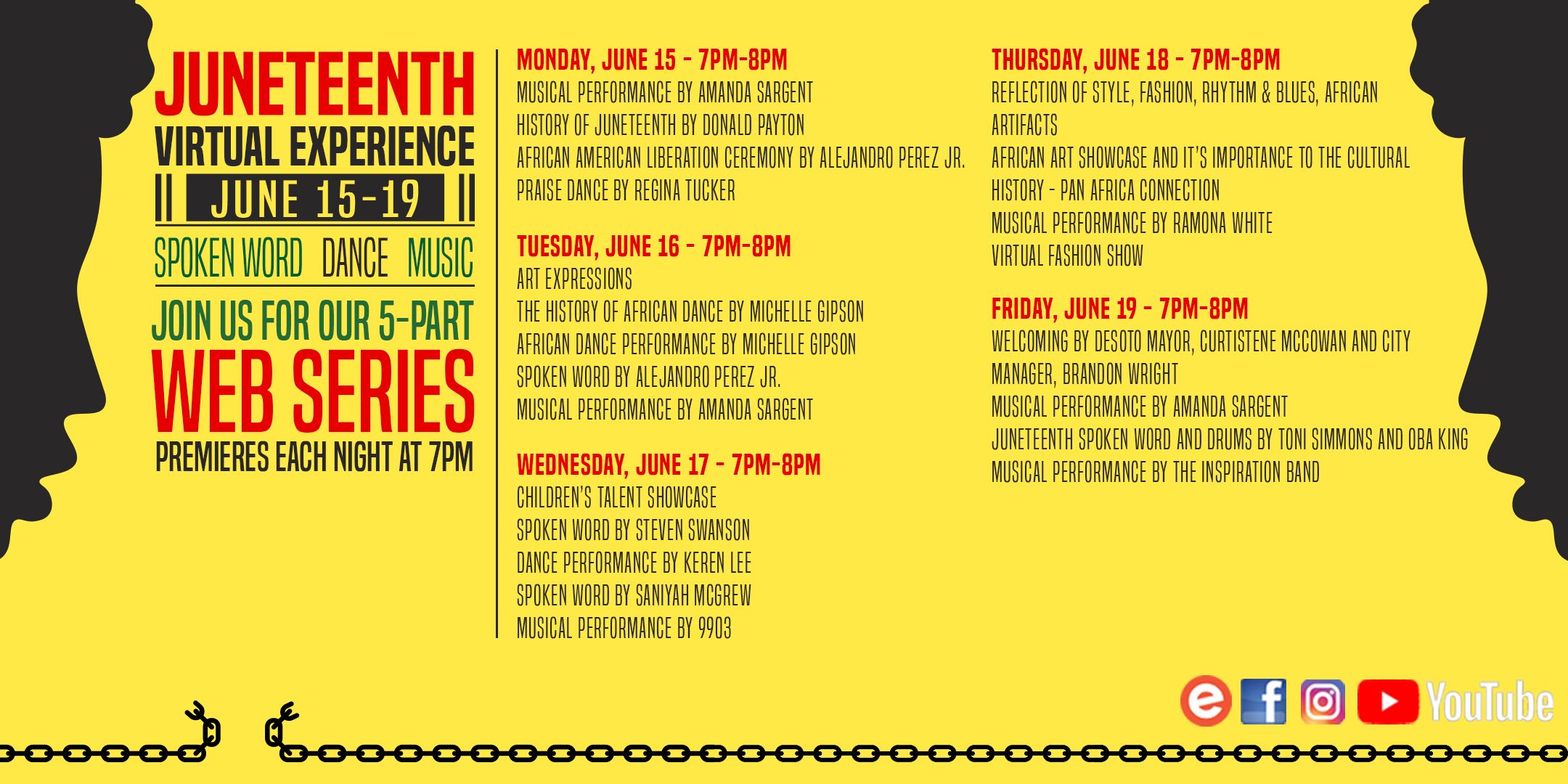 Alejandro Perez Jr.
Alejandro is a multi-disciplinary arts educator, creative content specialist & production consultant. He is also a practicing life-coach for young adults and teens and an experienced early education and kindergarten instructor. Perez has taught at East Dallas Community School/Bilingual Montessori and the Africa Care Academy (ACA), in Dallas, TX, where he was named the 2002 ACA Teacher of the Year.

Michelle Gibson
Choreographer, Cultural Ambassador, Educator, Mother, and Performing Artist, received her BFA in dance from Tulane University and her MFA in dance from Hollins University/American Dance Festival at Duke University. Presently Michelle serves on the dance faculty at the Booker T. Washington High School for the Performing and Visual Arts in Dallas TX sharing her expertise, passion, and culturally driven spirit with her students and colleagues daily. Gibson’s teaching practice and choreographic works range from genres of the African Diaspora, Contemporary/Afro-Modern, Afro-Funk, Jazz, and her own New Orleans Second Line Aesthetic.

Frank Moka - Base Drummer, Percussionist
This native of Pine Bluff Arkansas uses his Nigerian roots to create a cutting-edge sound that has taken him around the globe. Frank tours the world with stellar artists such as Erykah Badu, and Chris Dave & the Drumheadz. He has also played with a host of other top recording artists such as Kirk Franklin, Common, Mos Def, Marvin Sapp, Layla Hathaway, Tamela Mann, Mumu Fresh, The Funky Knuckles, and many more. As a musical director, Frank led Zap Mama’s U.S tour and is currently musical director of Felabration Dallas, the musical tribute show honoring the life of Afro-beat creator Fela Kuti. In his own band Dos Negros, Frank can push the boundaries and bridge the gaps between the musical genres of jazz, hip hop, soul, and traditional West African rhythms unapologetically.

Oba William King - Interactive Storytelling
Known as “The Poetic Storyteller,” Oba William King is a motivator, educator, and a energetic storyteller. He tours nationally presenting his dynamic programs that include song and traditional drum. The Actor/Storyteller has earned tremendous acclaim in Chicago, IL and other parts of the United States.

Ramona White
A captivating singer/songwriter, Ramona White is a passionate, soulful performer who takes listeners on a journey through a musical world where Contemporary R&B meets Retro-Soul balanced with the Quiet Storm and Gospel. Her lyrics are reflective of her southern Lone-Star roots, embrace the essence of a spiritual and fullness for life from an urban perspective. She hails from Fort Worth, TX and has performed in groups such as Kirk Franklin & The Family, Soaring Higher, Common Ground, and The Inspiration Band.

Donald Payton - Historian/Genealogist
Donald Payton is the President of the African American Genealogy Interest Group, which is a branch of the Dallas Genealogical Society. Mr. Payton has spent more than 35 years tracing family histories and doing historical workshops across America. He is a former Dallas County Historical Commissioner who has served on a special state committee to make June 19th an official Texas state holiday, and he has presented numerous Juneteenth workshops and programs in various states. Mr. Payton has also been featured in national media news events and interviews. In June 1998, he published an article for D Magazine entitled, “Timeline: A Concise History: Black Dallas Since 1842.”

9903 Aka AX2 & DeJah
Ax2 and Dejah are artists that bring fun, positive, and energetic music that everyone can enjoy. Ax2 & Dejah are supporters of anti-bullying campaigns, teen influencers for MADD (Mother’s Against Drunk Driving), and want to make a positive influence with their music. "We only get one shot at this game called life, so we have to do the best we can, while we can. Be yourself, love yourself in a world that’s sometimes cruel. Dream Big, Live Big". "You are not the 3 or the 2 but You are the 1".

The Inspiration Band - TIB
Eight musicians, vocalists and professionals in their daily lives with individual musical experiences ranging well over 20 years each, all from various areas such as New York, Oklahoma, Louisiana, and Texas. TIB came together simply for the passion of reproducing great family fun music from the past and current TOP 40 VARIETY playlists. These band took on the vision to create a LIVE show in which the entire family can.

Saniyah McGrew - Public Speaker & Storyteller/Actress
Saniyah is a 6th-grade student in Cedar Hill, TX where she serves as a Junior Board of Trustee. She is a member of the National Association of Black Storytellers and is currently an actress. Saniyah serviced as the valedictorian during her 5th-grade year at Bray Elementary School in Cedar Hill, and currently serving as volunteer for the City of Cedar Hill.

Keren Lee
Keren Lee is a sixth-grader at D. A. Hulcy Stream Middle School of Dallas, TX, where she’s a cheerleader. Keren also takes dance lessons at Stacia’s School of Dance in Cedar Hill. Her favorite subject is Social Studies and  hobbies include miniatures for dolls and sketching.

Amanda Sargent
Amanda Sargent is truly grateful for her strong support system that allows her to fully pursue her wildest dreams. Singing and acting at an early age, Amanda has maximized every opportunity and is proud to work continuously with Director Yolanda E. Hanspard. Amanda is actively involved in launching the next generation of leaders while pursuing her passions of singing, dancing, acting, writing, and governing.

The Best Southwest area which includes DeSoto, Duncanville, Cedar Hill and Lancaster is so named because of the cities’ ability to work together on projects that benefit Southern Dallas County. On June 19, 2004, these cities cooperated once again on a history making event by co-sponsoring a first-ever Best Southwest Juneteenth Celebration. The event rotates to each city every year.

Juneteenth is the oldest nationally celebrated commemoration of the ending of slavery in the United States.  Dating back to 1865, it was on June 19th that the Union soldiers, led by Major General Gordon Granger, landed at Galveston, Texas with news that the war had ended and that the enslaved were now free. Note that this was two and a half years after President Lincoln’s Emancipation Proclamation - which had become official January 1, 1863. The Emancipation Proclamation had little impact on the Texans due to the minimal number of Union troops to enforce the new Executive Order. However, with the surrender of General Lee in April of 1865, and the arrival of General Granger’s regiment, the forces were finally strong enough to influence and overcome the resistance.

Later attempts to explain this two and a half year delay in the receipt of this important news have yielded several versions that have been handed down through the years. Often told is the story of a messenger who was murdered on his way to Texas with the news of freedom. Another, is that the news was deliberately withheld by the enslavers to maintain the labor force on the plantations. And still another, is that federal troops actually waited for the slave owners to reap the benefits of one last cotton harvest before going to Texas to enforce the Emancipation Proclamation. All of which, or neither of these version could be true. Certainly, for some, President Lincoln's authority over the rebellious states was in question   For whatever the reasons, conditions in Texas remained status quo well beyond what was statutory.

Juneteenth today, celebrates African American freedom and achievement, while encouraging continuous self-development and respect for all cultures. As it takes on a more national, symbolic and even global perspective, the events of 1865 in Texas are not forgotten, for all of the roots tie back to this fertile soil from which a national day of pride is growing.

The future of Juneteenth looks bright as the number of cities and states creating Juneteenth committees continues to increase. Respect and appreciation for all of our differences grow out of exposure and working together. Getting involved and supporting Juneteenth celebrations creates new bonds of friendship and understanding among us. This indeed, brightens our future - and that is the Spirit of Juneteenth.