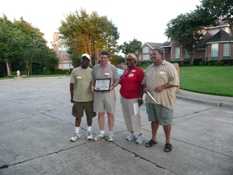 Purposes of the Association stated in the Articles of Incorporation are:


The Association cooperates with the City of DeSoto through the Community Initiatives grant program.  This program requires matching funds provided by The Association through voluntary donations (there are no dues required for membership in the HCHOA) and by time spent by members in the approved projects.  Activities of The Association since inception have focused on putting a ‘new face’ on the south side of the neighborhood by cleaning up and painting the wall between the area and Pleasant Run Road and which runs from Forest Glen to Canyon Ridge.  In addition to the cleaning and painting, the area served by The Association was indicated by the letters Hidden Canyon installed at both the east and west ends of the wall.

We have also participated in the National Night Out observed on the first Tuesday of August in 2005 and 2006 with neighborhood gatherings.  Regular monthly meetings and meetings required under the Corporate Bylaws have been rather irregular.  The NNO meetings were well received and well attended and we want to build on those successes.