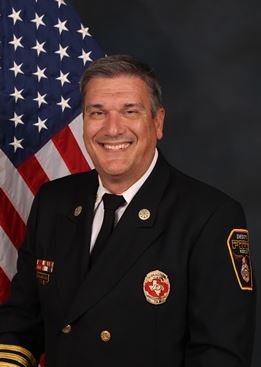 Bryan Whitacre joined DeSoto Fire Rescue on December 3, 1999.   Throughout his career, he has held the ranks of Firefighter/Paramedic, Engineer, Captain, Battalion Chief, EMS Division Chief, and now Assistant Fire Chief.  Prior to his time in the fire service, he served four years in the United States Air Force where he was stationed in New York.

Assistant Chief Whitacre, has attended the Texas Fire Chiefs Academy, attended numerous leadership classes and conferences, and he also hold several awards from his time with DeSoto.  He is set to complete his Bachelors degree in Emergency Medical Services Administration later this year.  Over the last couple of years, Chief Whitacre, in the role of EMS Chief, played a vital role in helping the fire department and the City of DeSoto deal with the difficulties of COVID.

He has been married to his wife Lisa, a college professor for 29 years.  They have two children, Breanna and Colby.